6 minutes that shook the world, the recording of Bohemian Rhapsody

Freddy Mercury wrote Bohemian Rhapsody for the Queen Album ‘Night at the Opera’, at 355 seconds or 5 minutes 50 the single track was almost twice as long as a single from a decade earlier. The song would become a stadium anthem and not leave the public vote of best song for decades to come, bringing with it a new lexicon of language; Bismillah, Scaramouch, Galileo, Little High Little Low.

The melody is so recognisable that a few bars only are enough to identify it. The track is the UK’s 3rd best-selling song of all time, staying at number 1 for 9 weeks in the UK and selling 1 million units by the end of 1976.

Queen, the band featuring Freddy Mercury, Brian May, Roger Taylor, and John Deacon recorded Bohemian Rhapsody in Rockford studios in Wales, Monmouth, between August and September 1975. The studio with the look and feel of a working farm has hosted some big names in music. It became the backdrop for the song ‘What’s the Story Morning Glory’ by the Gallagher brothers when their band Oasis recorded it at Rockford. 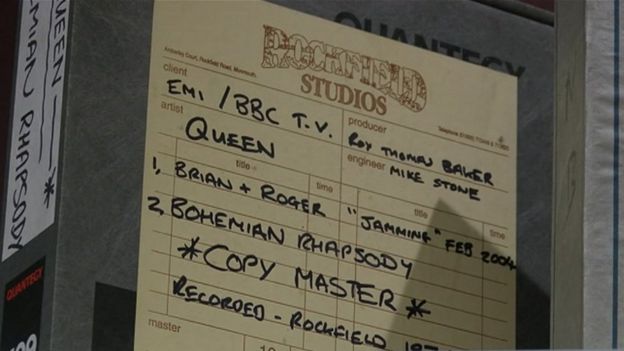 Roy Thomas Baker was the Producer on the Bohemian Rhapsody track during the mid-1970s session and also Roy was involved in 2002 alongside Brian May on a project to remaster tracks from ‘A Night at the Opera’  album into DTS 5.1 surround quality format. The 2002 remaster involved going back to the original 24 track master tapes from the 1975 recordings.

How did Bohemian Rhapsody get played on the Radio?

At the beginning of the 1970s, the average running time of music tracks was around 3 minutes, this was useful for radio airtime play and the capacity of vinyl records and other consumer recording equipment. By 1980 the average runtime for music tracks moved up to 3 and half minutes. Through the 1990s and 2000s, the average track times continued to climb to over 4 minutes. Queen’s Bohemian Rhapsody in 1975 smashed this trend with a track length of 5 minutes and 50 seconds. Freddy Mercury was told the track was too long and would not get radio airplay.

At just under 6 minutes long, the track did not receive immediate airplay. DJ Kenny Everett was the pioneer to ignore convention. Kenny played the track some 14 times in a short space of time on his morning radio show during the last weekend of October of that year.  Everett was a Friend of Mercury. He believed the song would be a hit for years to come and that prophecy turned out to be true.

It made Christmas number 1 and remained at the top of the UK singles charts for 9 weeks.

The inspiration behind “A Night At The Opera”, Chico, Harpo, Gummo, Groucho and Zeppo Marx

Bohemian Rhapsody is one song on the album “A Night At The Opera”. The Band was fans of the Marx Brothers. During their stay at farmhouse recording studios, they sat and watched the film “A Night of the Opera”. It seemed the obvious title for the Album. The Song itself a mix of a ballad, rock, and operatic sections. Vocals are Mercury, May, Taylor, the pitch variance in their voices could cover high middle and low notes nicely with no need to outsource.

Freddy showed on the piano keyboard the guitar parts he created to May the Guitarist.  Freddie apparently could compose and play complex fast guitar parts in this manner. May stated how this takes some impressive skill with the keys, very tricky to emulate.

The most famous Piano in the world

The Piano Freddy Mercury played the track on has somewhat of a legacy. Trident Studio’s stock piano, used by many artists, including Elton John, Bowie, Carly Simon. Another well-known track “Hey Jude” by the Beatles had also used that same Piano.

The beginning of the Music Video

Promo video for Bohemian Rhapsody was ahead of its time. They filmed the promo video for Bohemian Rhapsody on the 10th of November and aired that same week on Tv for Top of the Pops. The band took an iconic planed posed arrangement, inspired by a photograph of Marlene Dietrich.  Freddy Mercury at the centre front loved the idea. This was the beginning of a new era of the Music video.

In 1992 the Film Waynes World revived the song with younger people and somehow is often how people recall the song or were first introduced to it.

The meaning of Bohemian Rhapsody

The Drummer knows according to rumour, what the song means. However, keeping secrets close to his chest with a clue keeps the mystic intact. Research often repeats the story that Mercury enjoyed people making different interpretations of the lyrics. The Different composite parts and styles of the song seem to fit with the fact they recorded it in 6 different studios. Oxford University boffins even had a go at cracking the code of the song, with some interest outcomes.

The Lyrics of Bohemian Rhapsody

This word appears in the Qu’ran and means “In the name of Allah”.

However, Freddy Mercury’s heritage being Persian and was part of an ancient culture of Parsi  Zoroastrian Religion. This has a story connection with India, just as Mercury has a traveling link with India too.

From Italian performing arts and literature

A comedian character that appears as a boastful coward

Perhaps a reference to the  works by

Galileo could not use the word “Tide” in his publication as many were not ready to accept his views about what that would imply.

Some say see link below,  is to do with Galileos’s experiment where he dropped spheres of different masses from the Leaning Tower of Piza.

Other wins, The Guinness Book of Records’ Number one song of all time.

The light display in Carnaby is to celebrate the release of the 2018 film  Bohemian Rhapsody on the  24th October 2018. The lights were switched on by Original Queen members, Brian May, Roger Taylor and the actor playing Freddie Mercury in the film Rami Malek. The BBC news online has quoted Brian May as stating that the film is “not a Queen movie, it’s a Freddie movie”.

The making of the film – Brian May Clip

The Film suffered a lot of starts and stops. People leaving.

Any movie about Freddie and Queen will have one important question, who is singing or doing the music? Malek does a little of the vocals, the real Freddie Mercury has been used in places too. Some collaboration from Marc Martel who is in the link below, who like Freddie, also plays the piano. We have included two links, in case it seemed too surreal, stunning vocalist.

Marc Martel, the singer behind the voice