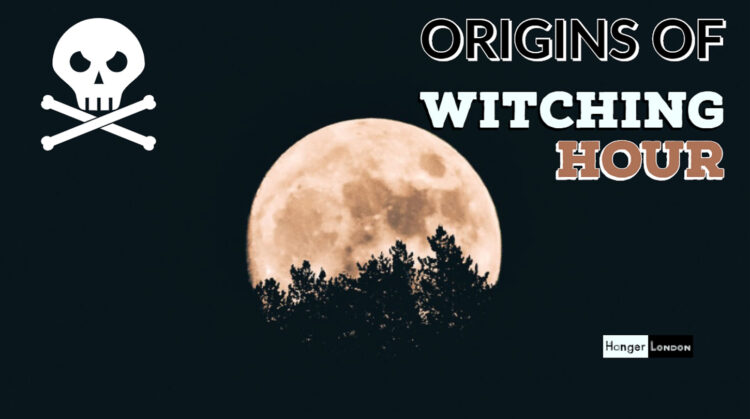 When is The Witching Hour UK?

3am the witching hour

They say the devil or demon is at its strongest at 3am and continues to be so into the next hour before the sunlight shines across the land. 3am was the time of rituals and other sacrificial activities took place, during the cover of deep darkness. They also say the crucifixion of Jesus Christ which took place at 3pm, making the exact opposite,12 hours later, the height of paranormal activity for devils and demons.

What is the Witching Hour?

The term ‘witching hour’ was first recorded in 1793 and refers to the time when witches, ghosts, warlocks and evil spirits are most active.  A time in space when the line between the living and dead is at its closest. but is that the full Story? Well read on and find out what is the Witching Hour.

Also known as the Devil’s hour, was even referred to in Shakespeare’s play Hamlet.

Tis now the very witching time of night, When churchyards yawn and hell itself breathes out Contagion to this world: now could I drink hot blood, And do such bitter business as the day Would quake to look on. Soft! now to my mother. O heart, lose not thy nature; let not ever. The soul of Nero enter this firm bosom: Let me be cruel, not unnatural: I will speak daggers to her, but use none; My tongue and soul in this be hypocrites; How in my words so ever she be sent, to give them seals never, my soul, consent.

What is the Bible’s view of the witching hour?

The references of good over evil are plenty, the Gospels tell us that Jesus died during the 9th hour, which translates to 3pm. Satan turns this upside down taking for himself 3am in direct mockery of God. The darkness of the night as the time of sin. The devil attacks at night, in your nightmares, pray before your sleep. As Jesus asked his disciples to ‘watch with me’ – the Watching Hour.

You will not fear the terror of the night, nor the arrow that flies by day,

6 nor the pestilence that stalks in darkness, nor the destruction that wastes at noonday.

The time between the living and the dead is a powerful genre in art and music. Where this form meets can be best expressed and illustrated through the album cover art of Derek Rigg’s and the music of British Metal Band Iron Maiden. There is so much going on in this art, hidden messages in graffiti on the walls, a love story from the grave in Twilight zone, power struggles in good over evil in Run to the Hills. Compare the tension with the calm cover of Mike Oldfield, Tubular Bells.

The Witching Hour Cometh for Babies and Toddlers

The time when the work day has come to an end, jacket over the shoulder and the witching hour begins for babies. 5 O’clock begins, usually the same time each day, late afternoons and evenings. With the new born screaming non stop all the way to bed time. Ever heard the phrase, “he/she doesn’t know what she wants!” welcome to the witching hour for parents. Typically this period is between weeks 2 -3 and begins to fade around 3 months. Normal nap time routine is out of the window, over stimulated, over tiredness creates the perfect mix of full on meltdown. Appropriately nick named, the witching hour, or as some office parents I know call it, another late one in the office.

Solution at hand for the Babies witches hour at least

This novel with spell binding story telling, by a Novelist who seems to love history of the time period. A Novel of witchcraft and the occult spanning over 4 centuries, from the author of Extraordinary Vampire Chronicles. Anne Rice

whether it is just before midnight or 3 am one ponders the question, what about the time zone you are in. Perhaps Witching hour rolls around the globe as day turns to night. It may have also not been so remote to think Time Zones where not at the forefront of thought when old Folklores were being written.

Where did the word Witching Hour come from?

Being awake during Witching Hour is not great for the body

Our body clocks function to a set pattern, with a set number of hours for sleep of 7 – 8 hours per day. We are biologically wired to rest when the sun goes down and wake up when the morning rises. A great time of day to be alive, the new dawn. But what if you turn that utopia on its head and be alive in the shadows of the night.

One thing the light, with the lights so bright your biological clock is ticking for work against your need to sleep in the day. The second challenge is sound. Ever opened the window at night and hear a fox three streets away, try hearing someone close a bin 2 doors down in the middle of the day. Sound pollution may make your 8 hours of day snooze one long challenge. But hey some folks do not have the choice of when to snooze from shift workers to those lucky folks living in the Northern Territories of the world where the day is spun upside down into perpetual darkness or perpetual light. Lest not forget the youth of today who club by night, and by hook or crook work by day.

Ready to start to get spooked? or is it just more science and biology. Somewhere between a half a two thirds of extra-sensory perception (ESP) episodes are reported to occur at night during dreams. Ghosts, demons or the devil, or your common old run of the mill neurobiological and neurochemical factors at play. We all know from our days at prep school, the main function of melatonin is to synchronise the body’s regulation of its system processes to the circadian and seasonal rhythms, and importantly to regulate the sleep-wake cycle.

Well melatonin may be linked to the pro-duction of the highly potent vision inducing endogenous psychedelic DMT, which is considered as a more likely neurobiological mediator of psychic experiences.

What I am trying to say folks. Its complicated.

The poem “Fragment” was written 27 Feb 1793 published in the Oracle. It was supposedly about the moments before Louis XVI was sent to the guillotine 21/jan 1793. At Square du Temple. A major part of the French Revolution this took place at Revolution Square Place de la Révolution.

The first stanza contains the reference to the Witching Hour.

“Now MIDNIGHT spreads her sable vest
With Starry Rays light tissued o’er;
Now from the Desart’s thistled breast
The chilling Dews begin to soar;
The OWL shrieks from the tott’ring Tow’r,
Dread watch-bird of the witching hour!
Spectres, from their charnel cells
Cleave the air with hideous yells!
Not a Glow-worm ventures forth,
To gild his little speck of Earth!
In wild despair Creation seems to wait,
While HORROR stalks abroad to deal the shafts of FATE!

“Night waned upon this talk and even the witching hour had gone by before we retired to rest.”

Whilst this was in the Georgian Era Victorians would have had a copy of this book or know of the character in this gothic horror story with a touch of early science fiction.

Another Scientific, rational view of what might be ‘Witching Hour’

The evolution of modern thinking has gone some way to changing the way our ancestors understood the world around them. Religion and Folklore from old have now been joined by Google, Twitter, and Facebook, and the odd scientific lecture. so one interesting twist to the 3 am Witching Hour phenomena.  At around this time, the average person goes through a deep sleep phase (REM – Rapid Eye Movement). The body cycles into this deep sleep, the heart rate lowers and body temperatures drop slightly. In the unfortunate circumstance that you wake up, right in the middle of this phase, you will not be in the best of places emotionally, feeling odd or weird even or heaven forbidden even scared, add perhaps some candlelight into the mix here. You get the picture. Weird, Superstition or is it just our own biochemistry? comment below.

Running from 1969 to 1975 for a total of 85 issues, the comic series followed the exploits of three witches Cynthia, Morded and Mildred.

Note on the Moon Picture – photograph by https://unsplash.com/@aronvisuals

great Album art of Iron Maiden, also not to forget Megadeath and even Danzig

How does the clock change affect the witching hour, and time zones differences, always puzzled me that

Because no matter the timezone the witching hour is in your night .so if it’s midnight or 3am depending on your zone and night that’s your witching hour Queen Victoria and Albert first came to Scotland in 1842.  Balmoral was to become the home from home, and Halloween at Balmoral would become an Scotland is a country of keeping with tradition and Halloween is no exception to this rule. Though Pagan rituals have been adapted or forgotten over © 2018-2020 All rights reserved | This website and its content is copyright of hangerlondon
wpDiscuz
3
0
Would love your thoughts, please comment.x
()
x
| Reply