On the 11th Hour of the 11th Month, the guns fell silent across the battlefields of the Flanders, the killing machine of war stopped its killing and destruction. For it was on this day, that Ferdinand Foch, the French Field Marshall, the allied supreme commander alongside the First Sea Lord, Admiral Rosslyn Wemyss signed the armistice in the French forest of Compiègne with the German counterparts Reich Minister Matthias Erzberger.

How many died on the last day of World War 1

Discussions on the terms of the Armistice took weeks to formalise. Letters from US President Woodrow Wilson, the Axis powers, Great Britain, and France. Agreements, disagreements, politics on the German side to initially accept terms and then go back to the table. While all this was going on, the war continued. When the terms were agreed, that morning at 5.22 am, the clock started to the end of the world’s bloodiest conflict it has ever seen. In that 5 and a half hours, another 2,738 would die, these soldiers would die for a war that their leaders had already agreed to end.

The Origins of the 2 minute Silence

One year after the end of World War One, on Tuesday, at 11 am on the 11th of November. The country stood still to mark what would become the annual remembrance of the Armistice, by observing a 2-minute silence. In these early raw days of peace, the country literally stopped to observe, whatever they were doing, they stopped the car if they were driving, industry paused when it was working, shoppers stopped if they were shopping. Every community in England, Great Britain, The Commonwealth, and the rest of the world had been affected by the Great War. Some carried the physical disabilities of the war, some carried the psychological hidden disabilities of the war, some families lost a father, a son, a daughter or a mother to the war and some saw part or if not all of their families disappear. Whatever the personal tragedies, the personal stories the country moved on.

It is the scale of the sacrifice which puts the need for the country to pause and reflect. My own house is also part of the World War One story, 2 brothers went to war, one buried in the battlefield cemetery in France, and the other Brother is buried in a cemetery in London.

Why is Remembrance Sunday not on the 11th of November

For 20 years the remembrance service ran on the 11th hour of the 11th day of the 11th Month, until the Second World War, where a decision was made to change the date to the nearest Sunday, to help avoid unnecessary disruption to the war effort and production. It is a testament to Great Britain and the stiff upper lip of Britons that during the testing and uncertain times of the Second World War, the Armistice remembrance service continued, in some capacity. It would take another 20 years after World War 2, in 1956 that the decision was formalised for the Remembrance Sunday to take place on the second Sunday in November at 11 am.

Having just explained the move to Sunday, the time is also of question. In the signed Armistice documents, the guns would indeed fall silent at 11 am on the 11th of November, Paris time, that is 10 am London time. Putting technicalities aside, it’s not the time on your wrist (or phone) its the fact that you pause and remember.

The importance of the Cenotaph to remembrance Sunday

Right in the middle of the road in Whitehall, is a grand monument called the Cenotaph, which becomes the main focal point for millions each year, as the Sovereign, the Sovereign’s family, the church, the government and representatives from The Commonwealth lay wreaths on behalf of the nation and their peoples.

What is the empty tomb of the Cenotaph

To mark one year after the end of World War One, British Architect, Edwin Landseer Lutyen was commissioned to build a temporary monument on Whitehall which would become called Cenotaph, which translates to mean ‘Empty Tomb’. On November 11th, 1919, the army rode a gun carriage with a Union Jack draped over the coffin of the unknown soldier, known only to God. The nation drew to this temporary monument in such an impassioned way that the decision for a permanent structure to be built in its place was made. Renowned construction firm, Holland Hannen and Cubitts built the permanent Cenotaph monument completely out of Portland stone for 1920, 11th November Armistice Remembrance which again was opened by King George V.

The monarch still to this day lays the first wreath at the Cenotaph at Whitehall. Other significant wreath bearers would be;  members of the Royal family, heads of state and other leaders especially from Commonwealth countries, heads of government, and political parties. The Nation observes a national  2 minutes silence. It now encompasses all wars since.  A religious service is held, marching parading important groups of personal including veterans. The Household division also takes part in remembrance Sunday.

The BBC coverage on Remembrance Sunday, the longest Televised show in history

The first BBC first broadcast of the national remembrance Sunday service was held by radio in 1928, and 9 years later, the BBC would hold the first televised broadcast of the event in 1937. It was continually televised each year from 1946 making it the longest televised broadcast programme. In modern times, the production effort is on a grand scale, the main programme is split into the ceremonial wreath laying by dignitaries followed by the march past of veterans and other services. The tone of event is key, and had always been anchored by the equivalent broadcasting heavy weight of the times. The 95 minute coverage is also known to delve into the personal stories of the veterans, holding interviews and mini reels from history. The BBC cover the event with 15 camera crews.

‘We Will Remember Them’ The Poem that defines Remembrance

The poem was written at the beginning of the War, its words remain timeless, with the most famous phrase, the 4th verse, which ends, ‘We will remember them’.

With proud thanksgiving, a mother for her children,
England mourns for her dead across the sea.
Flesh of her flesh they were, spirit of her spirit,
Fallen in the cause of the free.

Solemn the drums thrill: Death august and royal
Sings sorrow up into immortal spheres.
There is music in the midst of desolation
And a glory that shines upon our tears.

They went with songs to the battle, they were young,
Straight of limb, true of eye, steady and aglow.
They were staunch to the end against odds uncounted,
They fell with their faces to the foe.

They shall grow not old, as we that are left grow old:
Age shall not weary them, nor the years condemn.
At the going down of the sun and in the morning
We will remember them.

They mingle not with their laughing comrades again;
They sit no more at familiar tables of home;
They have no lot in our labour of the day-time;
They sleep beyond England’s foam.

But where our desires are and our hopes profound,
Felt as a well-spring that is hidden from sight,
To the innermost heart of their own land they are known
As the stars are known to the Night; 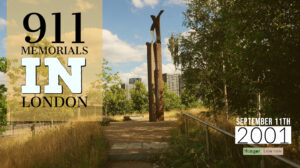 A sight to behold, 10,000 flames illuminated the moat around the Tower of London to mark the end of World War One, in Remembrance of